During my 18 years of life, I have seen my fair share of places around the world. I've seen the clear waters and sandy beaches of the Dominican Republic. I've toured around Europe, seeing different locales and cultures all the time. None of my experiences were quite like what was waiting for me on my Alaskan voyage aboard Princess Cruises; Coral Princess. 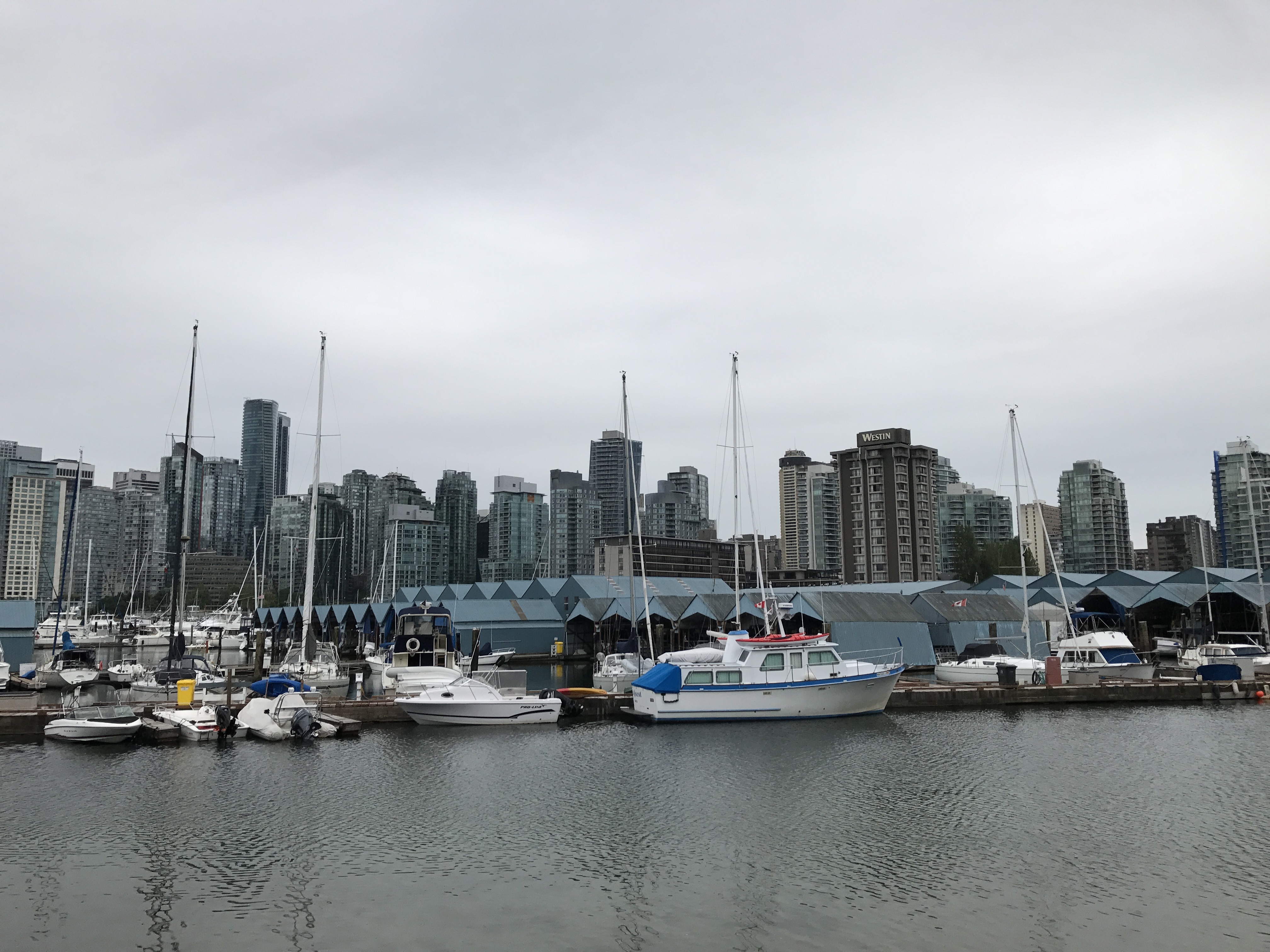 The journey began in Vancouver the day before we sailed off. Two long flights and an extended layover led up to this, and everyone in my group seemed relieved to finally have arrived. I was impressed with Vancouver itself, and admired its old-meets-new architecture. The scenery was a highlight, as we biked around Stanley Park, a lovely area in the northern portion of the city that lets you bike right by the water. For dinner we stopped at Nando’s, an old favorite of the family's from a previous London vacation, and soon retired to our rooms, excited for the next morning.
SATURDAY: EMBARKATION 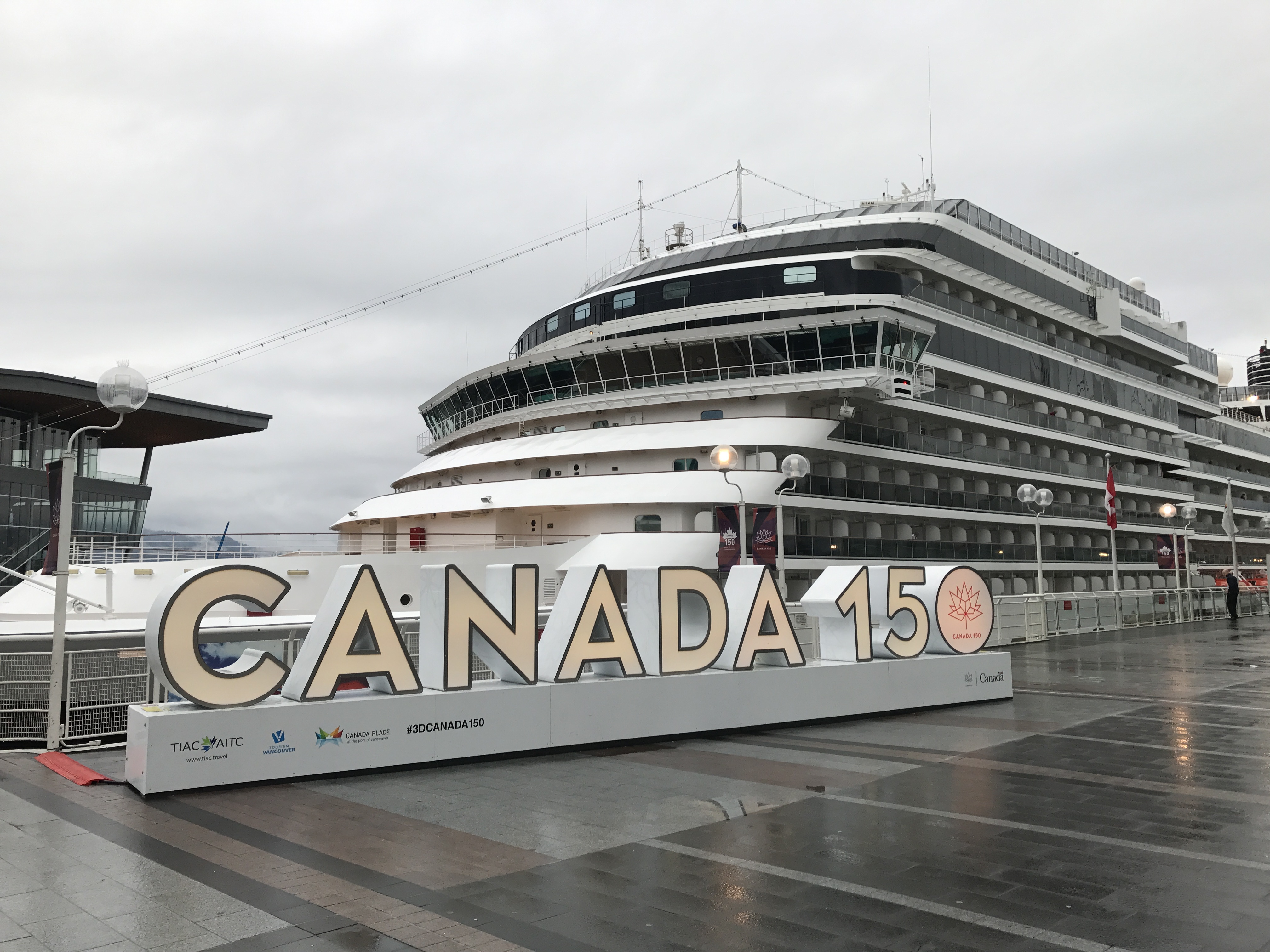 The boat didn't leave until after lunch, so we had ample time to explore the city and get breakfast. We found a rather scrumptious little spot a few blocks from the hotel called the Twisted Fork, and everyone left very impressed. The coffee was served in a “French press” style, and the Croque Monsieur I had was pretty out of this world. Tummies full, we ventured out to find the campus of Fairleigh Dickinson University in downtown Vancouver, which we almost missed as it was essentially an office building. We soon returned to our hotel (the Sheraton Wall Centre), gathered our luggage, and took a shuttle to the Coral Princess’ port of call. Check-in was fairly painless, and once aboard we took to investigating the amenities around the ship. My room was small, but felt larger than I expected. I quickly ordered a soda/drink package, as no one wants to be stuck drinking water when everyone else is having sodas or delicious cocktails. For lunch we stopped for pizza, which was right out of the oven when we strolled up. I didn't know this going in, but Princess Cruises is apparently known for their pizza, and after trying it I quickly understood why. The crust was just thin enough to have the perfect balance of chew and crunch, and the flavor brought vibes of New York’s famous style of pizzacraft. Feeling satisfied, I joined my family on their balcony to watch the boat leave port. The view of the Vancouver skyline fading from sight was a unique one, and I snapped a few pretty cool pictures before it was fully gone. After we had departed to the open seas, I took some time to explore the Coral Princess, had some dinner, and headed to bed.
SUNDAY - SEA DAY 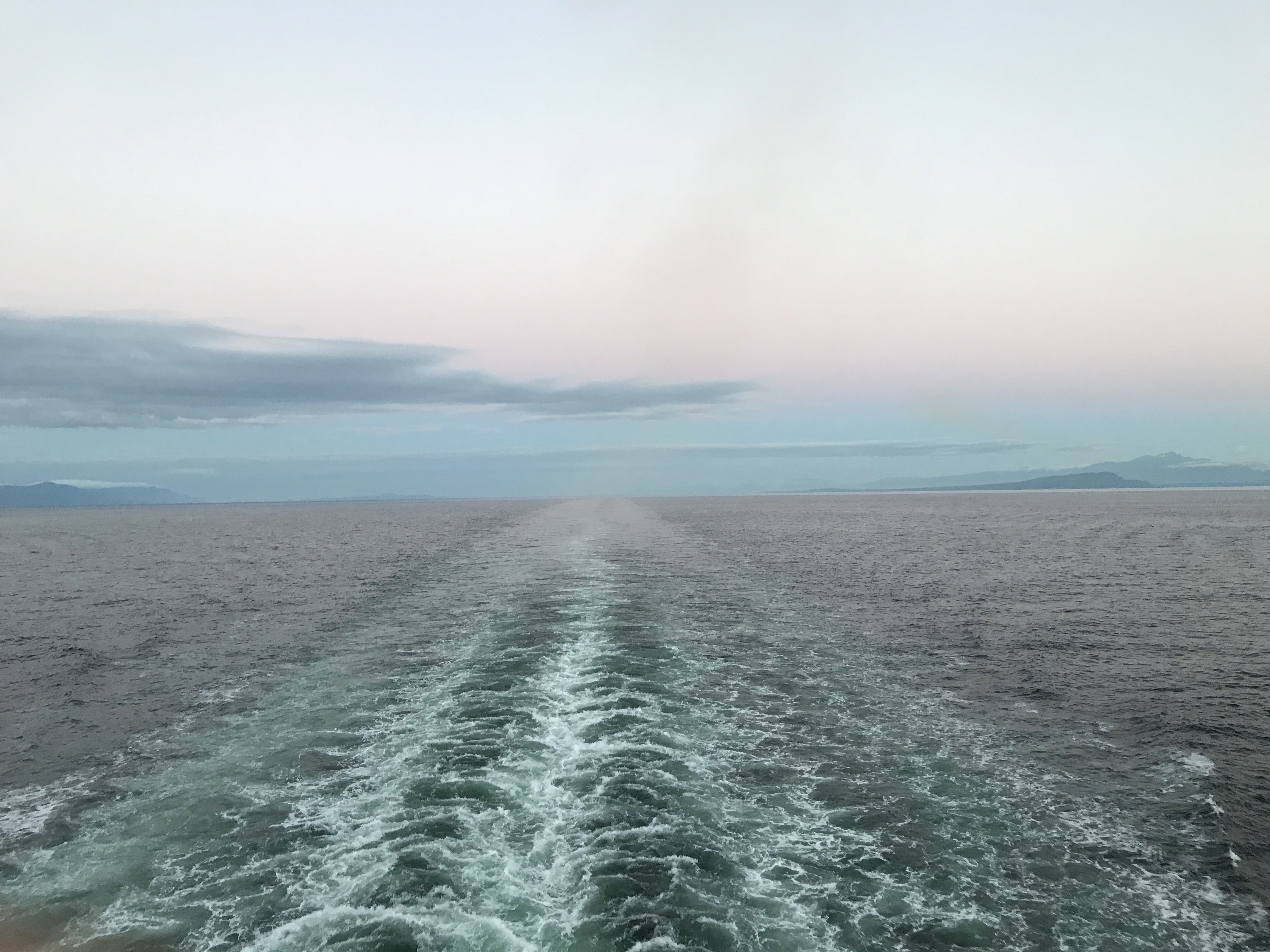 I slept in today, and felt quite rested for it. I cruised once before and found that I always slept very well on cruise ships, what with the rocking you to sleep and all. I grabbed a gourmet coffee from the International Cafe, and grabbed a book at the onboard library for a while. Despite my sleeping in, none of my compatriots were around, so I made my own fun for a while. Midday I joined the ship’s “pop choir” with some other passengers, and learned some songs from the movie “Grease” that we would perform live on the final sea day. Having met some new friends, I grabbed some lunch at the Horizons buffet and attended a trivia contest. Not much of note occurred following, save for dinner. At dinner we met our waiter Franco for the first time, and he was impeccable at his job. He was polite, friendly, and made great food suggestions. Thoroughly satisfied with dinner, my parents and I attended the ship's show for the night, “Encore”, which had little to no contingency between songs but showed off the delightful singing chops of Barbi McCulloch. After a fun-filled day I returned to my bunk to sleep the night away.
MONDAY: KETCHIKAN 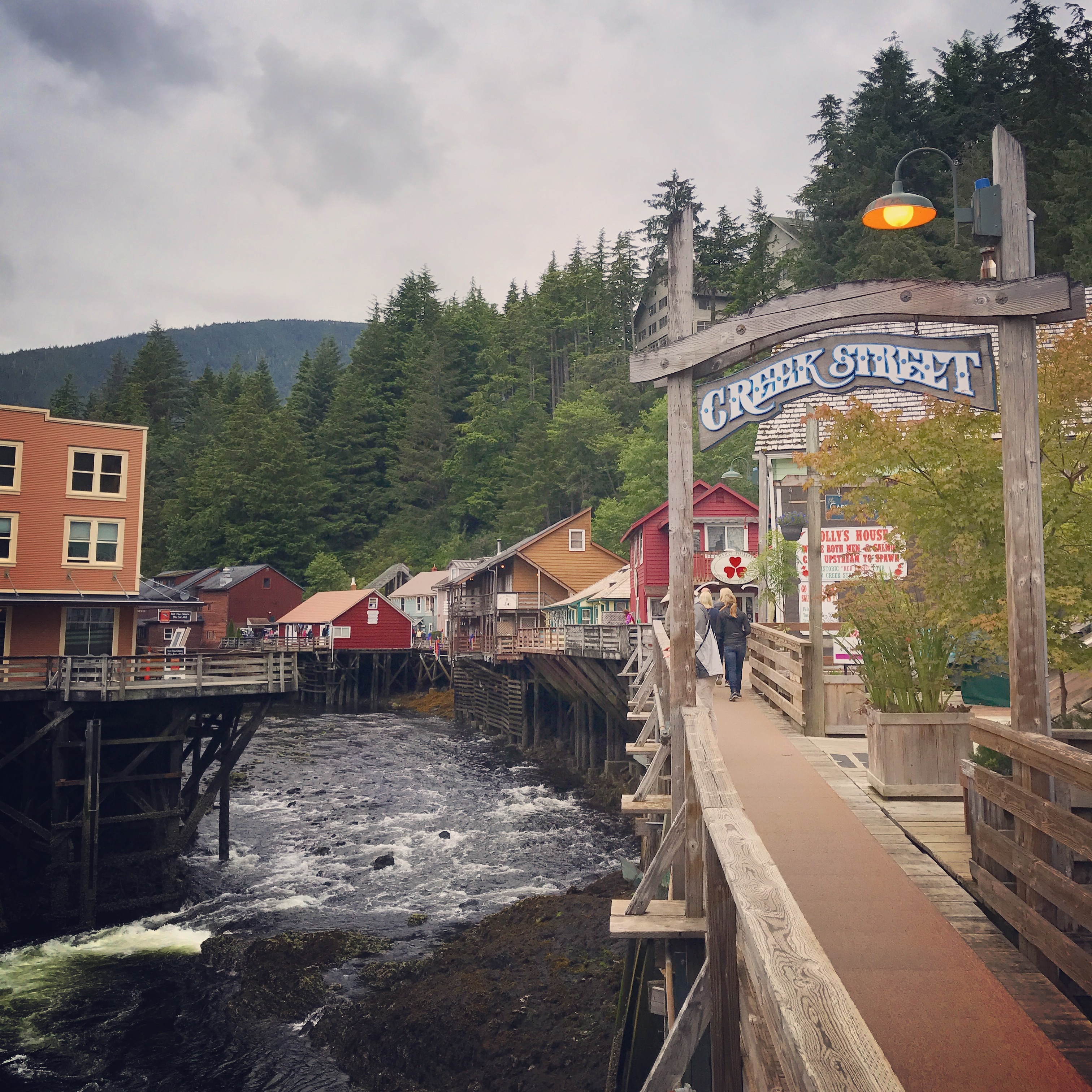 This was the first of three ports we visited, and though we weren't there for a very long time, we still were able to find some cool things to do. We first strolled down Creek Street, a unique little stretch of shops converted from a line of houses that served up some illicit activities back in the day. After getting some neat pictures of the aforementioned creek we headed to a salmon hatchery and a totem pole museum. Shortly after, we went to a sublime hamburger joint called the Burger Queen, an establishment that proudly says it's named as such because “Burger B*tch didn't sound right”. At around 1:30 PM we returned to the ship for some relaxation and had dinner a few hours later.
TUESDAY: JUNEAU 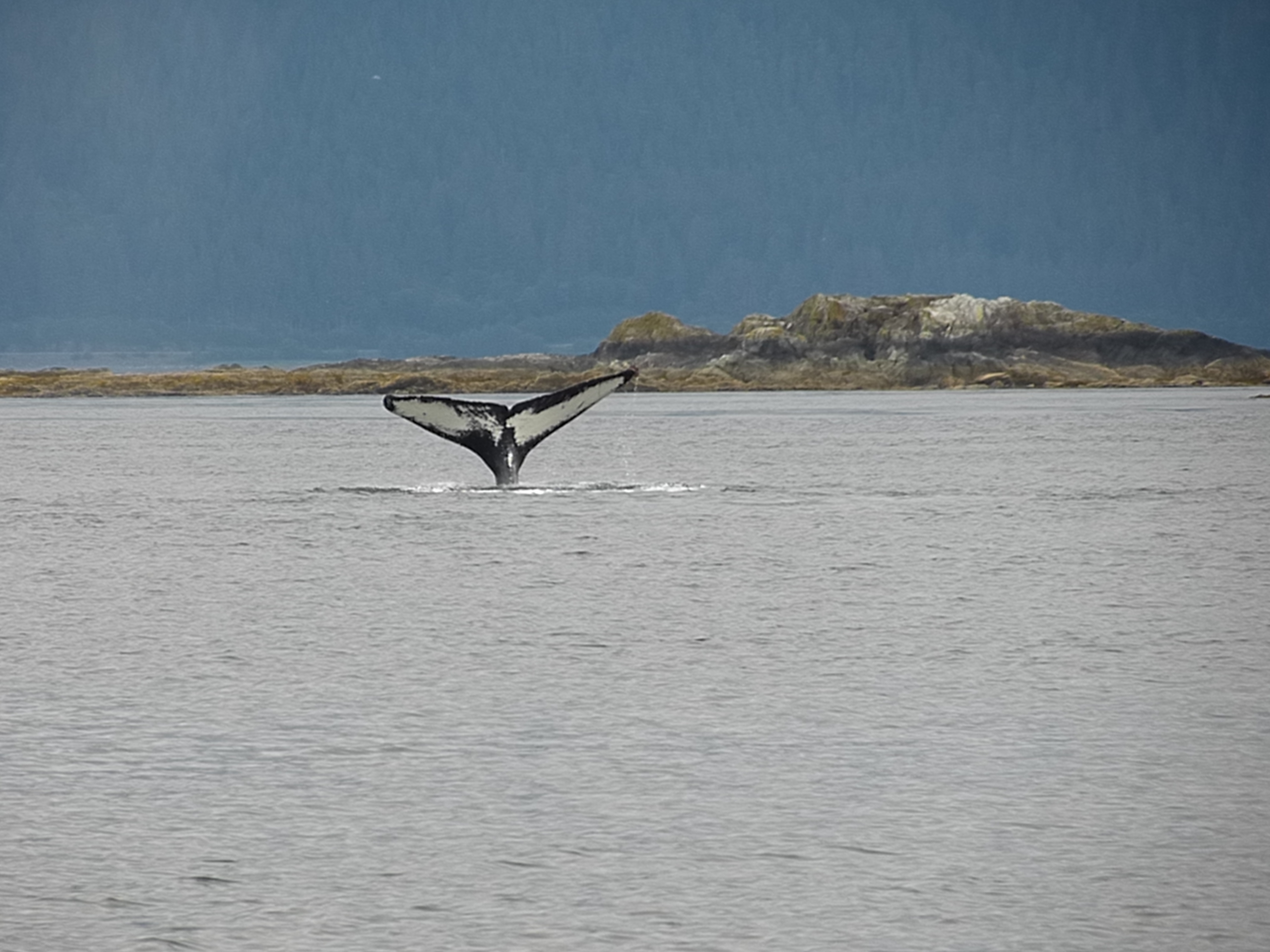 When I woke up Tuesday morning we were parked in Alaska’s capital, Juneau. Despite acting as the state’s main governmental hub, it's actually the third-largest city there. Regardless, we embarked on a tour early in the day to hike around Mendenhall Glacier and go whale watching. The glacier offered spectacular views and we got a view of some whales, though Ken seemed to be under the impression that it was a small amount of whales, an opinion I disagreed with. Upon returning to downtown Juneau we stopped at Tracy’s King Crab Shack for some, you guessed it, fresh crab legs. 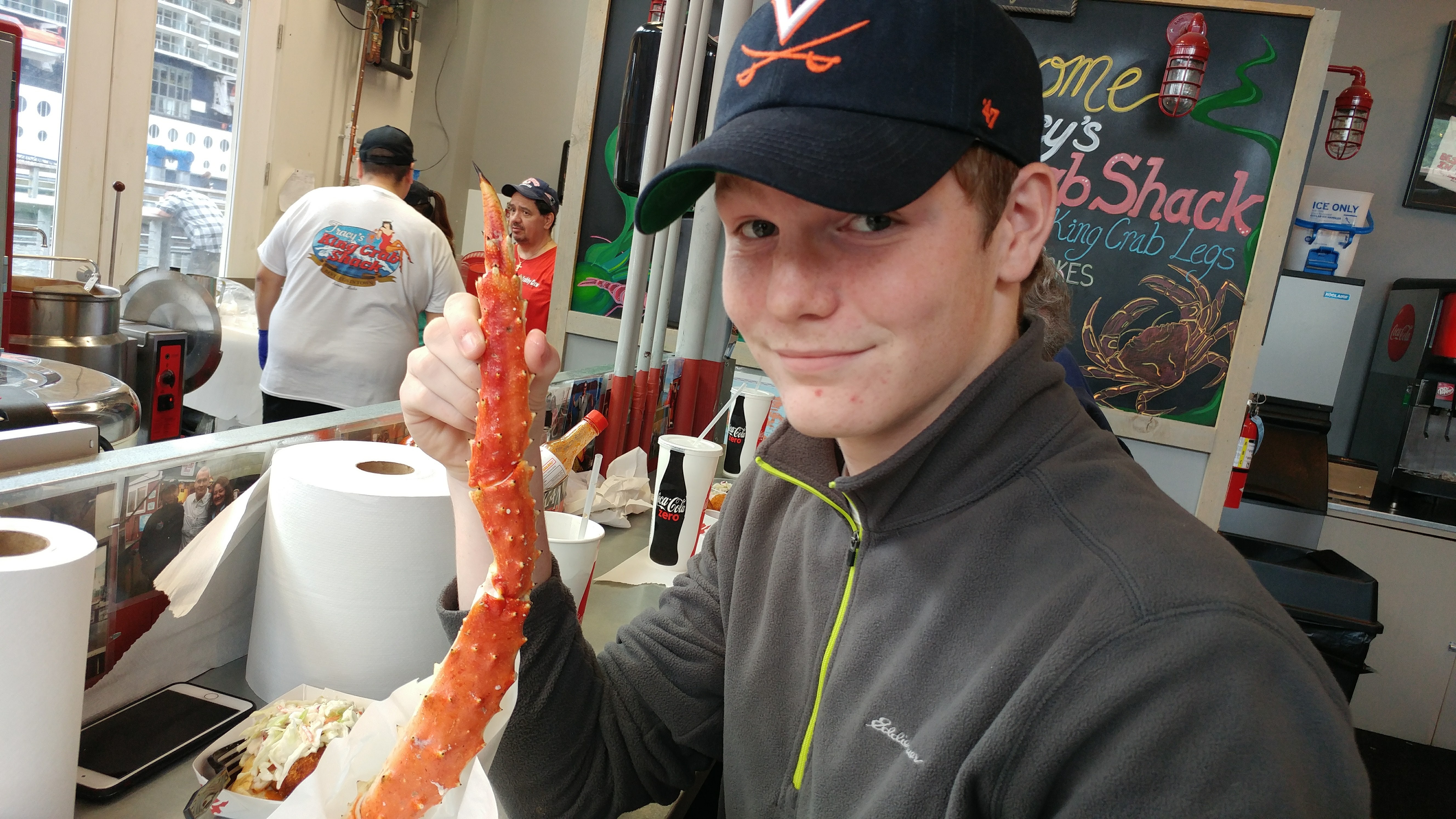 The staff was polite and respectful, even gave us the things on the menu that we didn't order free of charge, which was quite impressive (I think one of the cooks had a crush on my mom, but jury's still out on that one.) Afterwards I bought some coffee from a stand nearby and bought a cool 1960s style t-shirt as a souvenir. Satisfied with my time in Juneau, we soon reboarded the Coral Princess and set off for Skagway, our final port on our adventure. 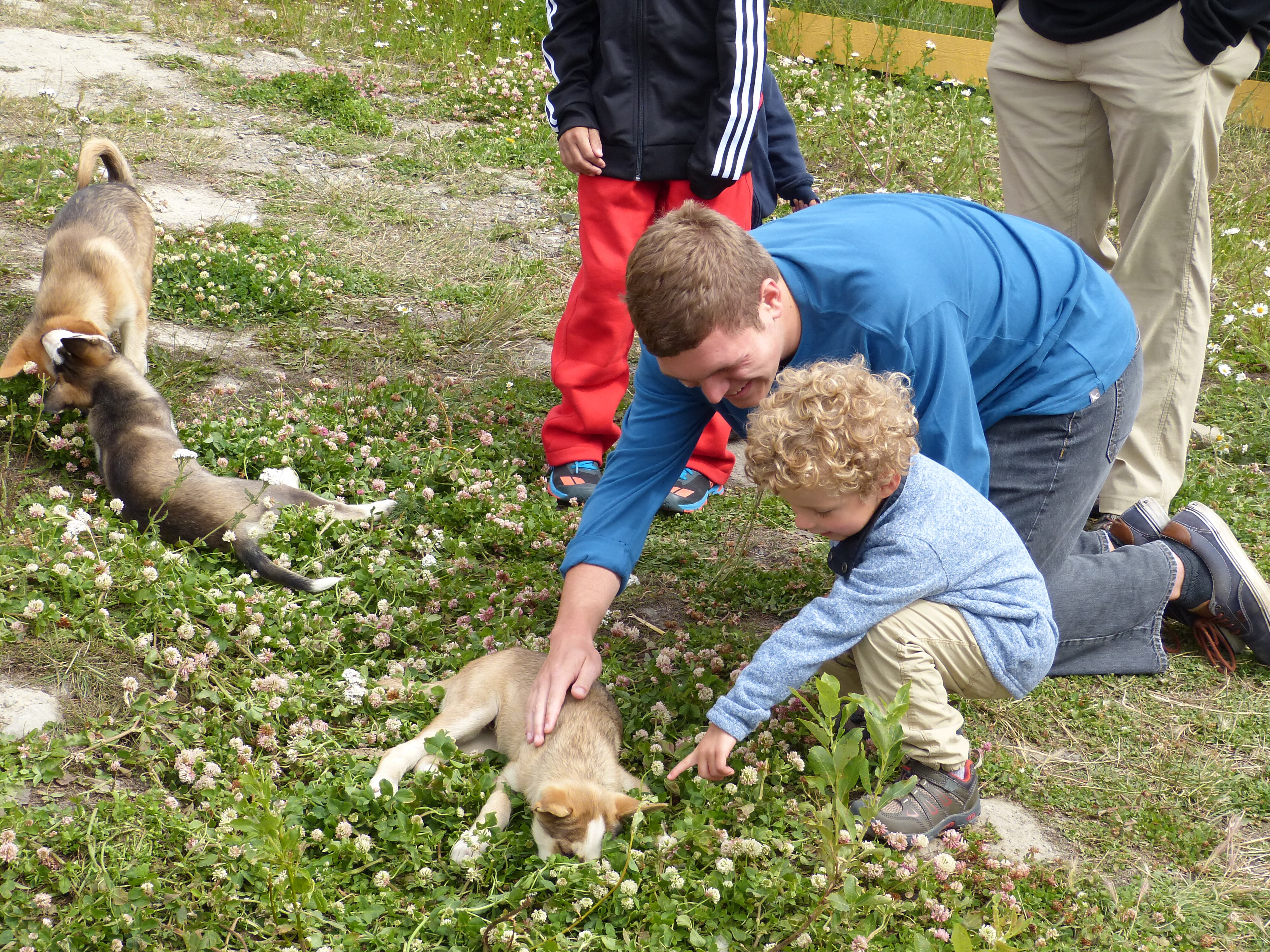 Skagway proved to be little more than a gateway to further adventure for the Miles clan, as we left and tore down the highway in rental cars soon after disembarking. After seeing dozens of mountains pass us by, we entered the Yukon, a neighboring Canadian territory. Once in Canada we stopped and played with some adorable husky puppies at an Tutshi dogsled training camp. I even got to hold one! After a bit more driving we arrived at the small village of Carcross and ate at the aptly named “Bistro” Before departing I grabbed a bottle of maple syrup from an energetic French-Canadian man and got some ice cream. Before boarding the Coral Princess again, we drove to Dyea, an abandoned town near metropolitan Skagway. Upon arrival we saw hundreds of salmon swimming in the river nearby. It was quite the spectacle and we were very surprised to not see any bears among us scooping them up. Speaking of bears, the story doesn't end there. We departed Dyea but quickly my aunt alerted us of a bear hanging out right next to the car. 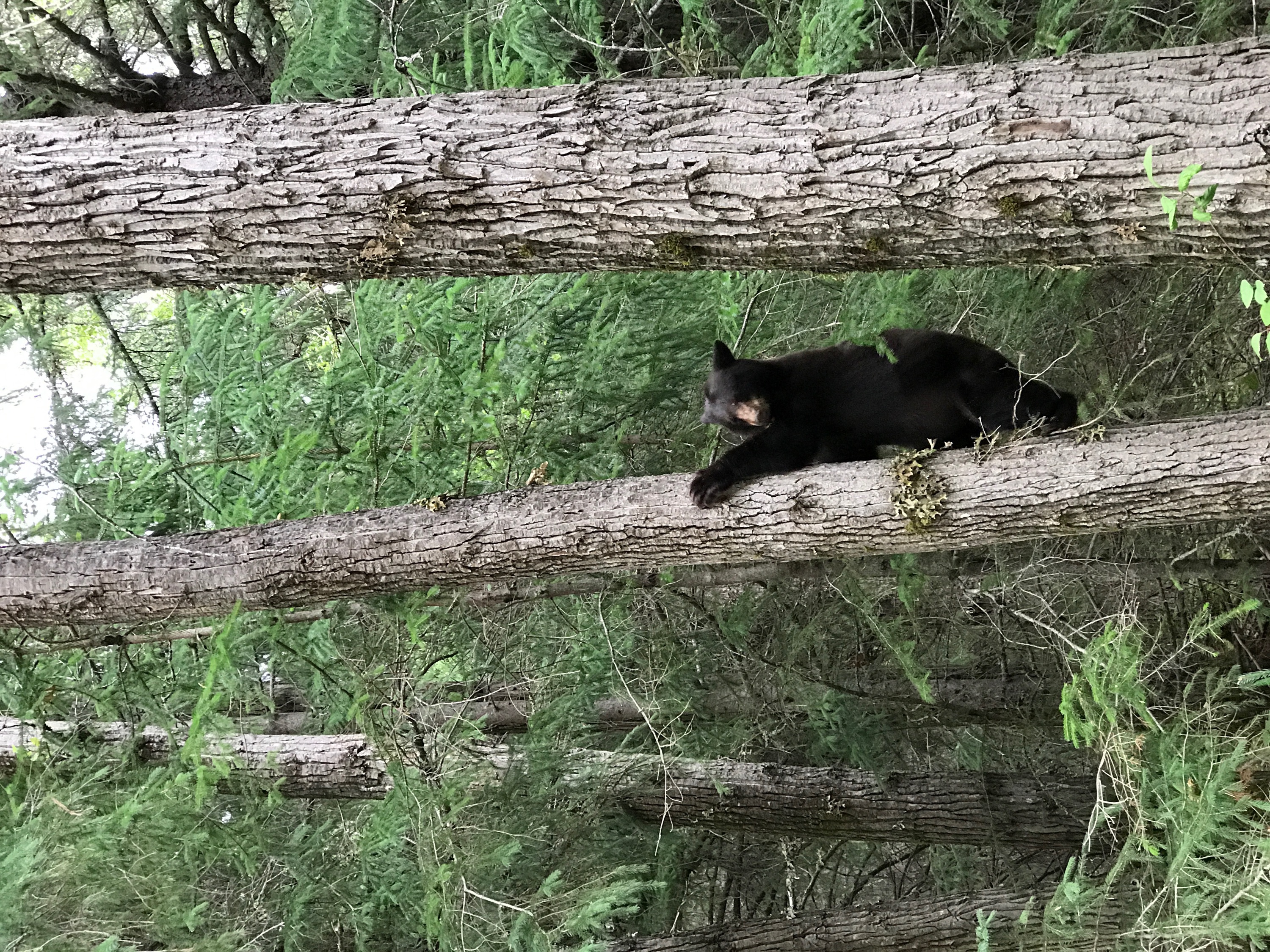 We came to a stop and observed it climbing a tree to find termites to eat. It was an astonishing sight and it was very lucky that we were able to get good video of the encounter. After driving back and returning the rental car we re-embarked on the ship and grabbed a coffee before preparing for dinner and some comedy in the evening.
THURSDAY AND FRIDAY: SCENIC CRUISING 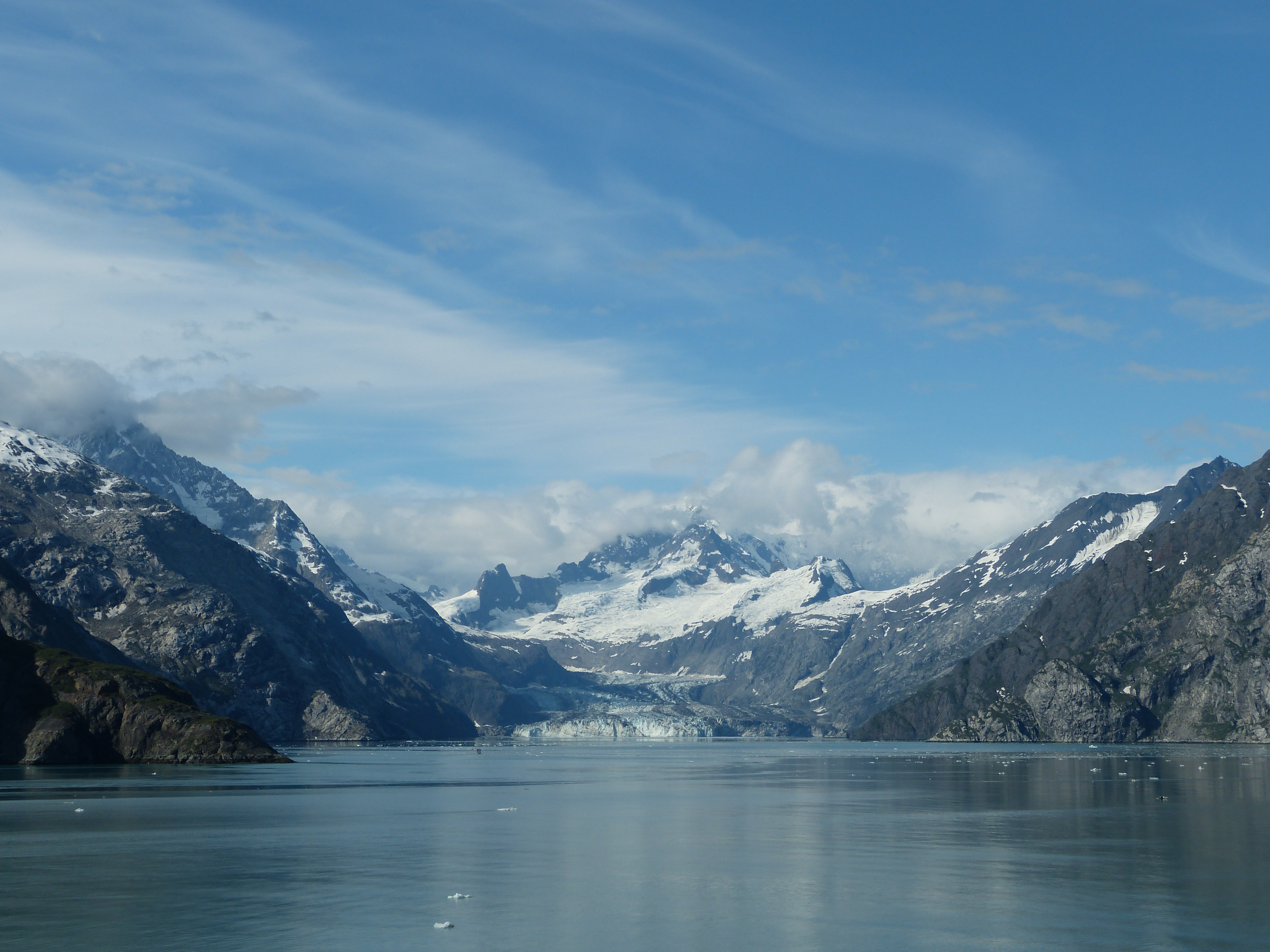 Rather than stopping at another port the next two days, the Coral Princess sailed through Glacier Bay National Park and College Fjord to end off the adventure. This provided some pretty spectacular views (as I'm sure you'll see in the attached photos) and some ample time to catch up on reading as well as play cards with the family. Much pizza was consumed during these two days.
CONCLUSION
I hope you've enjoyed reading about my adventures through the vast expanses of Alaska, I know I've certainly enjoyed touring around and documenting them. This cruise was a far better experience than the first one I had been on (which was a pretty standard Caribbean cruise with Carnival) as there were more ports and overall more to do at them, plus I'm not a huge fan of beaches and I did not come across a single beach throughout this trip. Overall, very happy, would probably do it again. Thanks for reading!

Connor Miles is an incoming Hospitality Management student at Fairleigh Dickinson University. He has previously worked as a contributing writer to the Reading Eagle's Voices section. Follow his misadventures on Twitter and Instagram at @cjmiles_99. 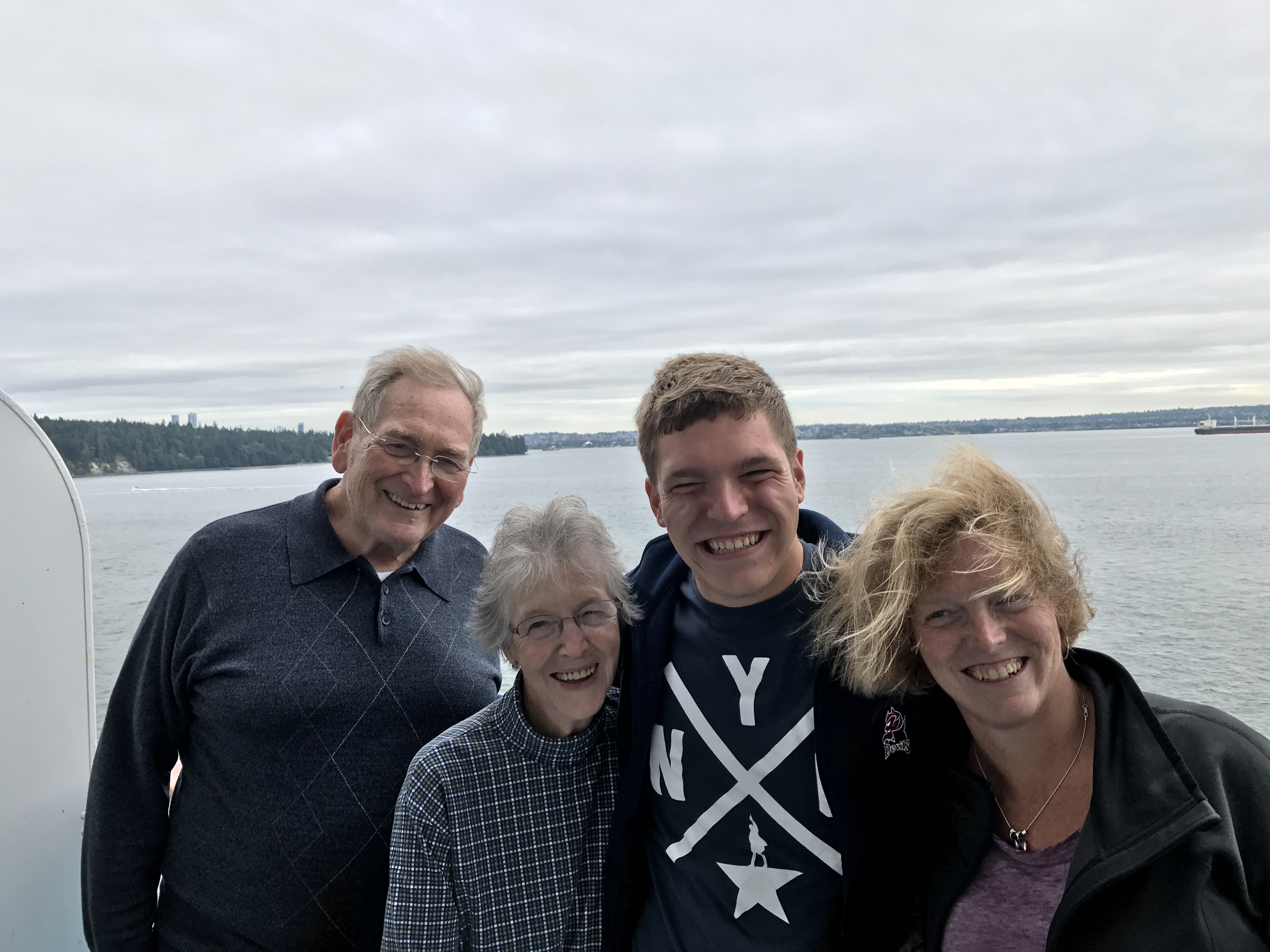